Bali is widely known for its beautiful beaches and wonderful people. During the days I was researching the island and creating my itinerary, I was becoming more intrigued with Ubud and the mountain region of Bali. I’ve been to and seen some great beaches throughout my travels but I rarely spend time in the tropical mountains. The mountains were calling and I decided to spend three days in Ubud, trekking through the forest. My number one goal was to hike through the rice terraces which are abundant in the area, with some on the UNESCO World Heritage list. Being a solo traveler, it’s sometimes difficult to find a guided tour at a fair price. I’m often asked to pay the two person minimum. A half day hike through the rice fields isn’t too popular so I couldn’t find a group tour I could join. The tour company tried to convince me to join a bicycle tour that would go through the fields. I didn’t want to compromise because the bike tour didn’t include the Pura Gunung Kawi Temple. With the help of the front desk clerk at my hotel, I was able negotiate price less than the two person minimum and I was able to book the tour I wanted. One hour later, 8:30 am, my driver and guide picked me up from my hotel and we made our first stop at the Tegallalang Rice Terraces. This was just a photo opportunity and not part of our hike. It’s a beautiful hillside covered with rice fields and I’m sure this would have made a great hike, also. We then continued higher into the mountains and soon reached our destination.

We then stopped at an unmarked section of a rice field and the guide and I got out of the vehicle and started our hike. My excitement began but it quickly diminished as we hiked for 30 minutes and the terrain didn’t change. It was level ground with the rice fields stretching as far as my eye could see. It was hard to get the depth of the beauty of the fields. We then cam to the first paved road since we started. I was totally unimpressed with this outing, thinking this was the end of the hike. We started to hike up the road and that’s when my guide advised me that the Pura Gunung Kawi Temple had more rice fields. But, before that we had to hike through this small village. The village looked like it had been unchanged for at least 150 years and as we walked we were greeted with barking dogs all the way to the temple. The dogs alarmed the whole village of the presence of complete strangers. The people didn’t seem to mind. I’m sure they had seen hikers come through here before. 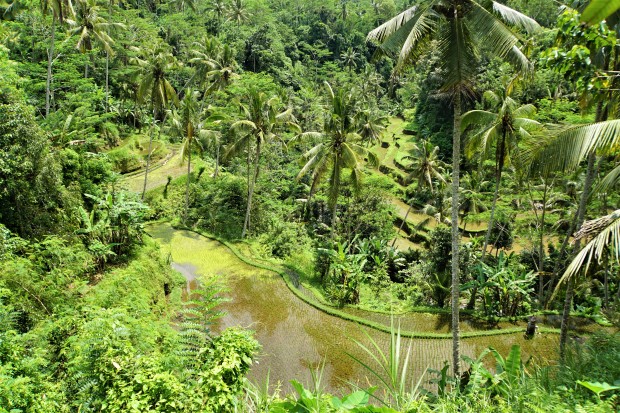 We were ready to enter Pura Gunung Kawi and my guide stopped me from entering and advised me that we could not enter sacred ground without wearing a sarong. He wrapped me in the sarong in the traditional fashion, without him I would have just wrapped it around me like a bath towel. We walked down the steep stone steps, past your typical souvenir shops and the fields became visible. The rice terraces I was hoping for. We hopped over the right side of the steps and on to the rice fields and renewed the hike through the fields. It was spectacular! He pointed out that an older part of the temple was in the direction of the hike. We continued on and we came to a wooded section and I could hear a waterfall. My guide turned around and asked if I wanted to hike up to the waterfall.

With a smile, I said “Yes, of course.” It was just a short hike, maybe five minutes but it felt a little odd climbing with a sarong around my waist. There it was a bonus waterfall in the middle of my rice field hike. It was a refreshing rest stop but it was time to continue. 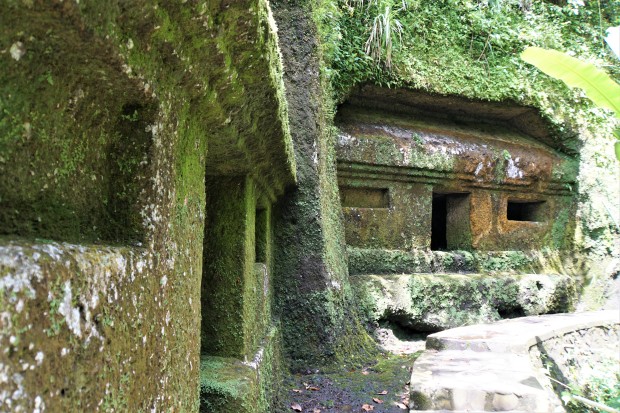 At the end of this portion was this amazing cliff side dwelling dating back to the 11th century where the Hindu monks had once lived. As I looked into these cave dwellings, I could only imagine the hardship these people had to endure in living here. 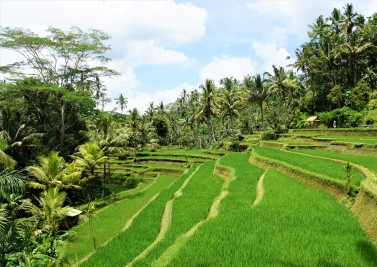 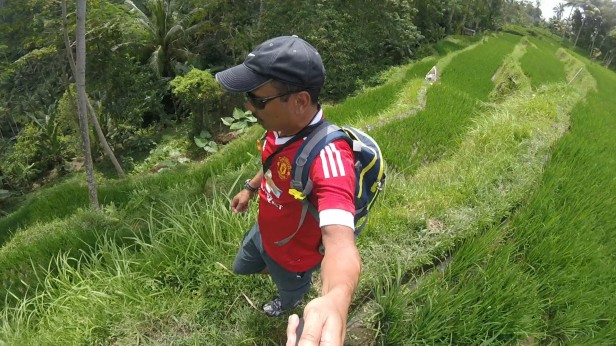 We thin traced our way back to those steep steps and proceeded to the main portion of the temple. The rice terraces were so beautiful, even my guide had to take some photos.

On the left side of those steps were high cliffs with carved shrines called candi. The shrines are said to be dedicated to the local queens. I looked with amazement and wondered how this was accomplished without modern tools. 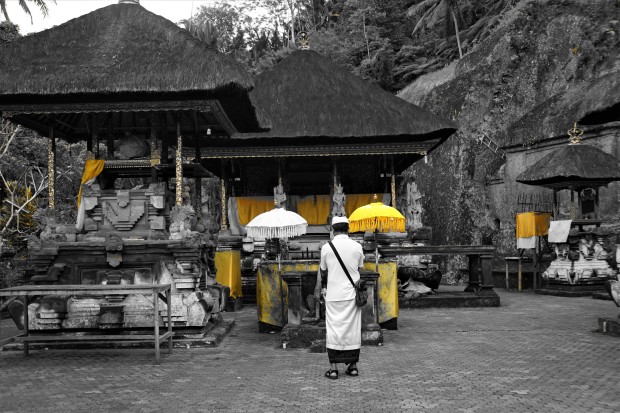 At the bottom of the steps and passed a bridge was the main temple. Walking through the temple was like walking through time, to a period of much simpler times. A darker time, in comparison, but a brighter time in regards to enlightenment for the local people.

This wasn’t the end of the hike. We, now, had to hike through the jungle to get to our pickup point. It was another half hour through the rain forest, along the river. The only strenuous part was having to hop from one boulder to another to cross the river.

This half day Sacred Hike of Bali will definitely stay with me for a life time. I would highly recommend visiting the Ubud area of Bali and Pura Gunung Kawi should be at the top of your list. Don’t pass up the experience!

9 thoughts on “Sacred Hike of Bali”