Bangkok has many alluring travel destinations. And, if you are a fan of James Bond, you have to remember James riding a boat through the floating market of Bangkok. When I conceived my itinerary for the Bangkok portion of my trip, I asked myself “why not indulge in a little fantasy and float down the market as James Bond once did?” That fantasy was to become a reality. 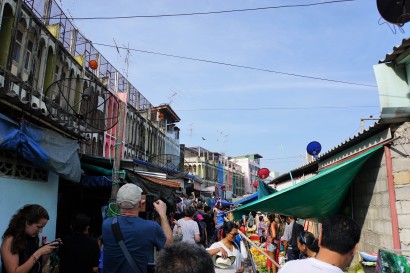 I woke up early one morning to achieve this plan. But, before I accomplish this dream we were on our way to the Maeklong Railway Market which was only 30 minutes away from the floating market and an easy decision to add to the itinerary. This is the one of a kind market featured in National Geographic, among others. “Why is it unique” you ask, the market runs along the railroad line with the tracks defining the center of the market. It is an active line with the train passing the market four times a day. The space is so tight that the vendors have to pull back the awning of their make-shift shop as the train passes. The produce are left right next to the tracks as there is enough clearance for the train to roll right over them without damaging these products. And as soon as the train passes, the awning and larger products are quickly placed back to their original place as if nothing happened. Unfortunately, we were delayed by the Bangkok traffic and the usual 90 minute drive took just that much longer. We arrived five minutes prior to the passing of the train so we hustled to the market. The driver stopped long enough for the tour group to jump out of the van and we quickly found a spot along the tracks. The market was already full with mostly tourist and I found my place at the end of the market before it crossed a street. 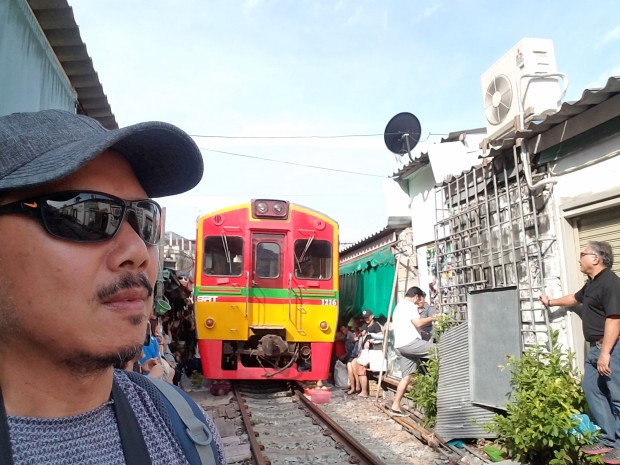 It was a short lived experience as the train slowly made its way down the tracks. I was up against a wall and the train passed within inches of me. It’s a surreal moment as this train passes, the train I would have never imagined of seeing in person and wasn’t originally on the itinerary. The guide thought it was an easy decision to visit the market because of the close vicinity of the floating market. We didn’t get to stay long since this wasn’t our planned destination. We just stayed for a total of ten minutes, five minutes waiting for the train and another five picking up a drink or a quick snack. Just long enough to get a quick selfie with the slow moving train. 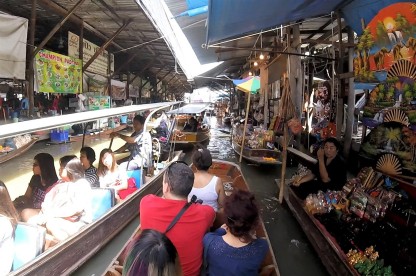 From there, it was only 30 minutes to the Damnoen Saduak Floating Market. There are multiple markets in Bangkok but most are only open during the weekend and this market is open every day which fit my schedule since I was here on a weekday. We had arrived, in front of large souvenir shop and it didn’t look very impressive at first glance. We walked further into this shop and there it was, the river, and the market floating on it. It was an amazing first impression. The guide wanted to know if anyone wanted to purchase a ticket for a paddled boat ride and everyone said yes, of course. Obviously, I was the first one to pay for my ticket and couldn’t wait to get on board. It was finally my turn and my James Bond moment began, not as glamorous since I had to share a boat with about six other tourists. We were slowly paddled through the market with vendors on each side of the river as well as in boats selling their wares as we pass. If we were interested in purchasing any goods, we could just motion to the location of the vendor we wanted to visit and we would be paddled to them. I didn’t make any purchase while I was in this boat. I didn’t think I had the negotiating power as the rest of the boat is waiting for you to haggle with these vendors so I waited until hit land again. This was truly one of many highlights of my Thailand trip and the number of photos and videos I took reflect that. The market is made up of multiple different vendors selling fruits, clothing, souvenirs, and restaurants featuring local meals. Now on land, it was time to shop. I found that the larger shops to have the better prices especial one that had “price as marked” items had the best prices and you didn’t have to haggle. My tour package also included a long tail speed boat cruise through the canals of the area. The boat takes you through the canals used as roadways by the locals. It takes you through the local neighborhoods near the market. It is not a tour I would pay extra for and could have done without.

I had fulfilled another James Bond experience in the floating market and received a bonus moment at the railway market. The tour continued on but these two events will be remembered forever.

← Bangkok, City of Temples
The Legend of Siam →