Whale Sharks of The Yucatan

I travel not to escape life, but to live it.

After all, our time is limited as mortal beings.

I just returned from a trip to the Yucatan that featured one of the most amazing experiences on a list full of incredible experiences. Off the coast of Isla Mujeres, and an hour boat ride from Cancun, Mexico, is the plankton-rich waters and prime feeding ground for whale sharks. These gentle giants are magnificent and it was quite an honor just to be in the water with them. These animals come here annually from late May to the end of September for the food-rich waters. They come here out of their own free will, the kind not enticed by humans that feed them for tourism but free of human influence. They skim the top of the water with their mouths wide open to take in as much minute organisms in the water and swallow all at once as it filters the water through its gills. They are referred to as whale sharks due to the fact that they feed as whales due by filter feeding.

When we first arrived, there were only approximately 20 boats in the area. We swam in pairs, always with the guide, two at a time with ten guests in the boat. It didn’t take long to see one as they crisscrossed the waters, taking in food. It was now my turn, fourth couple to hit the water, the whale sharks were of the smaller variety measuring in at 15 feet. After about ten minutes in the water it was time for the next pair. By the time my 2nd turn in the water had come, the boat captain decided to move further out of the feeding circle as the number of boats swelled to approximately 40 and the number of whale sharks had diminished in the center of the zone. We made our way to the edge of the zone which turned out to be a great decision. Here we go again, I’m back in the water and the whale sharks are numerous. Not only that, they are enormous, approximately 30 feet. So large I would swim alongside and them and then let them pass. Thinking I was out of their, I was nearly hit by their tail swinging back and forth as their radius was much larger than I expected. This happened twice but I managed to avoid coming in contact with them. That wasn’t my only near run-in with them. I was swimming along another large shark and quickly stopped to avoid getting to close when another large one was swimming behind me to my left. Not seeing it at all, I would have definitely run into it if it wasn’t for my guide who swam behind me and grabbed me by the shoulders to keep me from swimming into its path. 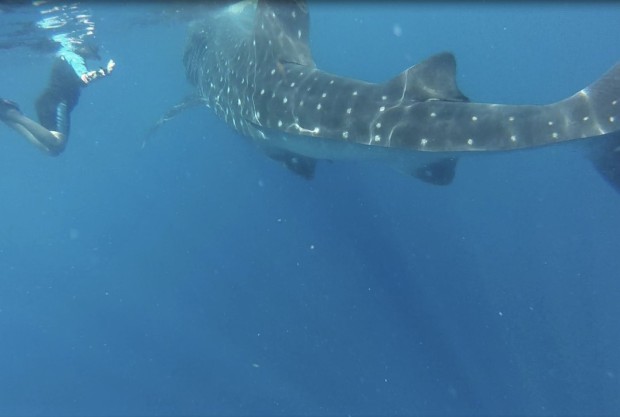 These Tours are limited to 90 minutes of swim time so we were able to have 3 turns in the water. After the first group got out of their initial swim it was apparent what the sharks were feeding on. It was fish eggs which the currents had collected in this location. Eggs the size of a pinheads were now clinging to our hair. I could only estimate that these eggs must have numbered in the millions with the whale sharks sucking up thousands with each run.

With the increase in popularity, apparent in the number of boats in the water, I hope it doesn’t affect the whale sharks migration habits and they move to a more remote feeding ground. I’d love to do this again hope everyone has the opportunity to do so as well.

17 thoughts on “Whale Sharks of The Yucatan”