During my visit to Namibia I decided to do a safari that would allow me to see most of the country. The safari began in the capital city of Windhoek and it would take over 6 hours to drive to the northern end of the country to the famed Etosha National Park.  Etosha is a semi-arid sandy savanna that has been home to the famed bushmen for hundreds of years. The park is said to be home to one of the best game drives available in southern Africa. Here, the game drive is predicated on the need for animals to visit the watering holes and the roads lead to these holes. Unfortunately, during my visit we were experiencing short burst of rain. Dense rain clouds would roll through the park and drop rain on the desert floor making water readily available throughout the park. The animals were no longer obligated to make the trek to the watering holes and could find water wherever they may be. It made game spotting a little difficult as the animals were scattered. It made the safari a bit frustrating; especially in comparison to the safari I had in the Maasai Mara where the fields were covered with game. The animals we did see were either at a distance or were walking away from the road so we could only see there rear.

An animal I had not seen in the Maasai Mara and was hoping to see here in Etosha was the hyena and we were able to see two but they were going away from the road in a prairie filled with grass so I was unable to capture them whole.

I also wanted to see the desert elephant as this breed was different to the regular elephants which need multiple gallons of water daily, these elephants have evolved and can go two weeks without water. They are known to cross the road in certain areas outside the park also.

I was also looking forward to see a rhino since I think they will be extinct in the near future. We did spot one in the shrubs near the road but, again, we were unable to get a clear shot of him. 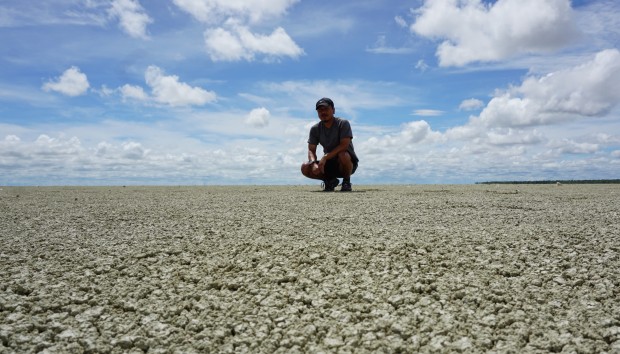 The name Etosha comes from a Oshindonga word meaning Great White Place referring to the Etosha pan. The pan is a vast open expanse of shimmering green and white that covers a quarter of the Etosha National Park. It is the largest salt pan in Africa and is the park’s most distinctive feature, visible even from space.

In retrospect, the Etosha National Park is still worth the trek and specially in better conditions, without the rain. 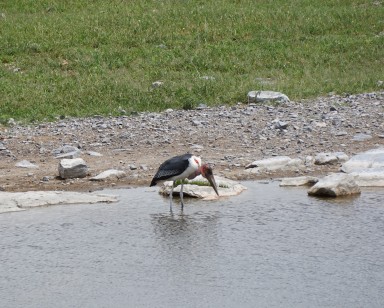 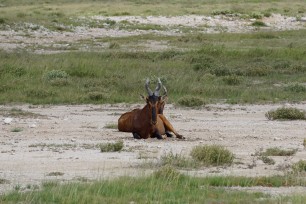