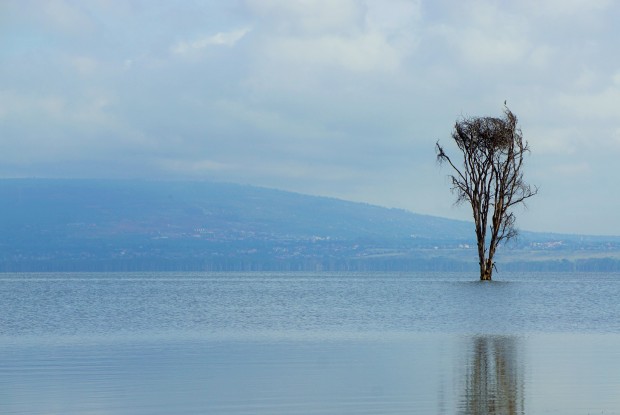 Lake Nakuru National Park is famous for its thousands of flamingos, at least it used to be. Many of these birds have moved and favored other lakes. During my visit, I only saw a few dozen of these flamingos who have now accumulate at Lake Bogoria.

The park is now a sanctuary for the black rhinos and the endangered southern white rhino. Armed guards can be found here as rhino horns are prized possessions for poachers. These horns can produce a profit of up to $300,000 per horn. I believe all rhino species will eventually be on the endangered list so it was a sight to behold when we came upon two black rhinos grazing in the field. These two didn’t seem to have any fear as they went along with their business while our van came upon them. The southern white rhino was not as comfortable with us as they fled as soon as they saw us coming. Would you blame them, it seems everyone is after them for their horn. As quickly as we saw them, they were gone into the thicket. I quickly snapped as many shots as I could before they made it out of view. I hope this conservation effort succeeds and these rhinos are introduced to the wild once again.

The park is also home to a different species of giraffe, one that is endangered also. The Rothschild’s giraffe is a smaller version of the species and grows three horns and not the common two. We also witnessed two giraffe’s fighting, swinging its head at the opposing giraffe’s chest. This went on-and-on with the two taking intermittent breaks before continuing the battle.

Up the road we could see the sentinels of the jungle, the baboon. They gave the warning howl that alarmed every baboon in the area which the other animals also recognize it. The Giraffe’s and impalas all stood in place peering in the same direction as the baboons. A Jaguar was lurking in the thick bush, my guide presumed and rightfully so I assume. Nothing came of it and the antelope ahead were back to their routine with the alpha male battling the younger males from getting to close to his harem of female antelope.

The flamingos may have left for a more abundant feeding ground but the lake still attracts many birds including pelicans and raptors such as the long crested eagle.

Nakuru National Park maybe a small preserve but it has its attraction. Viewing the endangered species such as the southern white rhino and Rothschild’s giraffe are worth making the trek here. 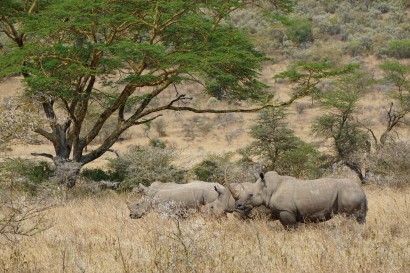