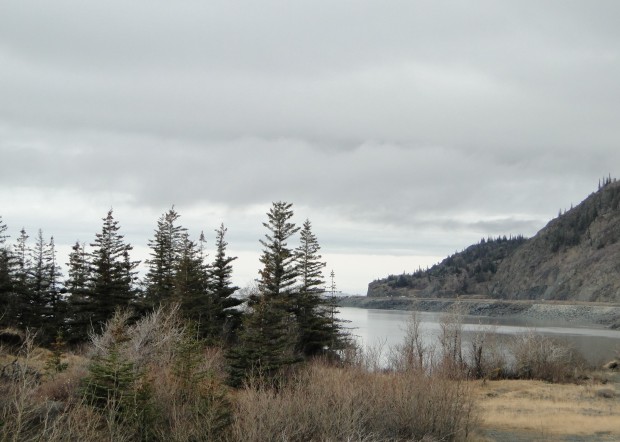 “Alaska the Last Frontier” is the motto and an appropriate one for this vast expanse of wilderness. I’d been here once before but during the summer. I returned to Anchorage for my winter expedition last week on March 4th during the week of the Fur Rondy (Rendezvous) Festival and the ceremonial start of the Iditarod. 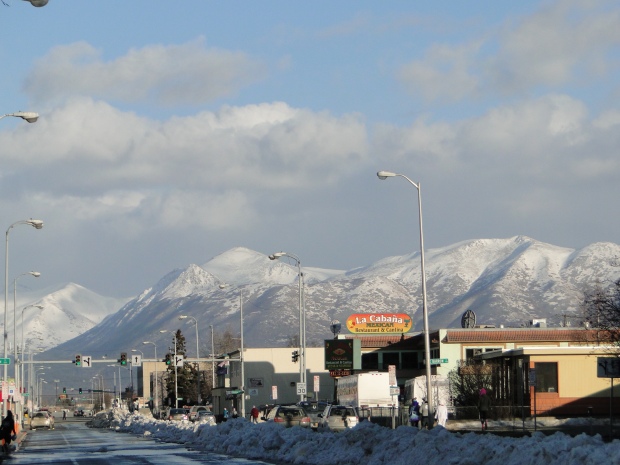 The downtown section of Anchorage was again the best place to stay with its many restaurants, bars, and hotels in the area. The bulk of the Fur Rondy activities also took place here. I had hoped to see the city covered in snow, picturesque Christmas card kind of views, but I was told it had been unseasonably warm during my visit with the high temperature of 38 degrees farenheit. Some hillsides were covered with snow but most of the city was icy making everyone more wary of each step in these spots. 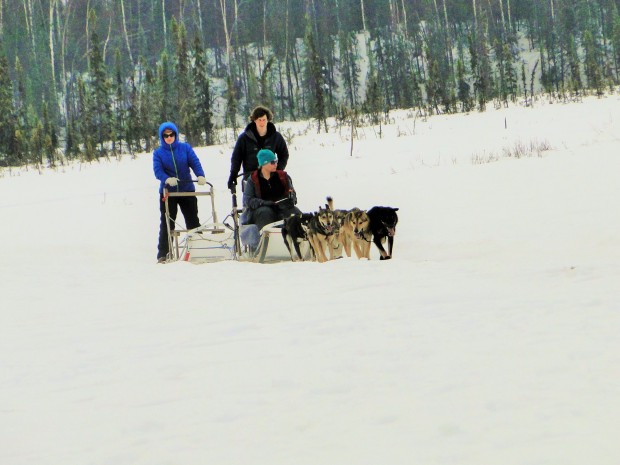 The warmer weather also affected the snow pack in the area hillsides and mountains forcing the cancellation of my dog sled tour. I was fortunate to be able to reschedule this expedition to Dallas Sieve’s (2 time Iditarod winner) kennel further north in Willow, Alaska.

The nights were also cloudy making viewing of the Northern Lights, or Aurora Borealis, impossible to do. Anchorage isn’t the best place to view the northern lights but I was hoping for at least a chance to view them. 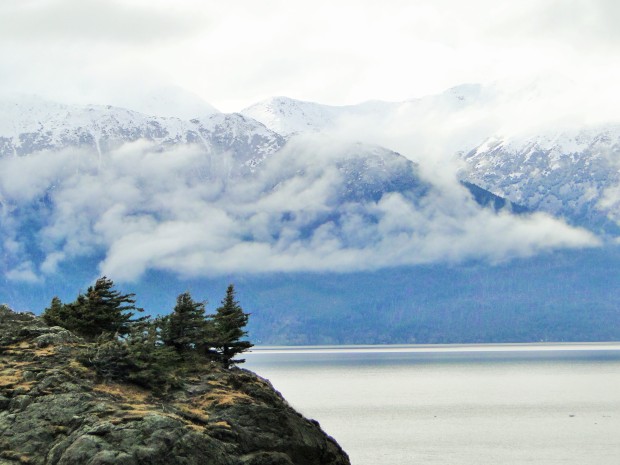 On our way to The Alaska Wildlife Conservation Center, it seemed as if Mother Nature wasn’t sure whether it would snow or rain today. Her insecurity made for an odd morning with the sky filled with rain and snow flakes. It cleared up as we passed the city limit with clouds lingering a top the mountains. 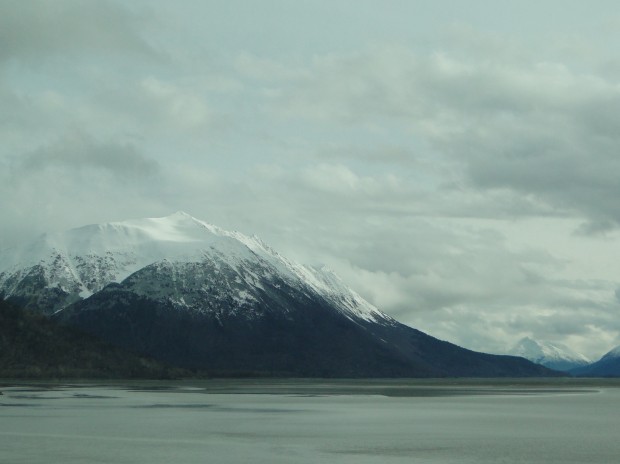 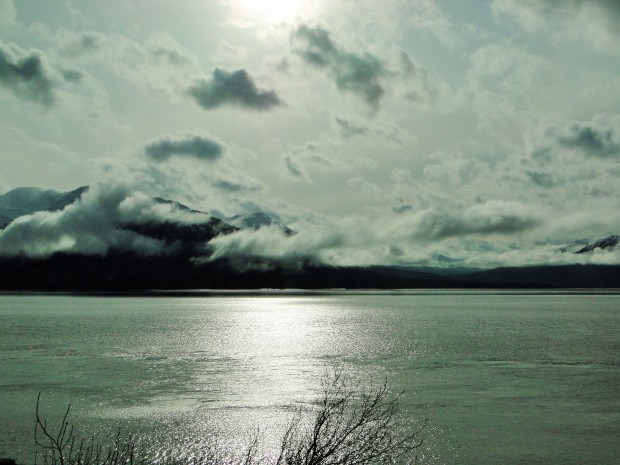 The lack of sunlight made for a moody photo much the opposite of my experience in the summer time. As the tour van drove down the Seward Highway (Highway 1) I was able to get some amazing photos while we were driving. 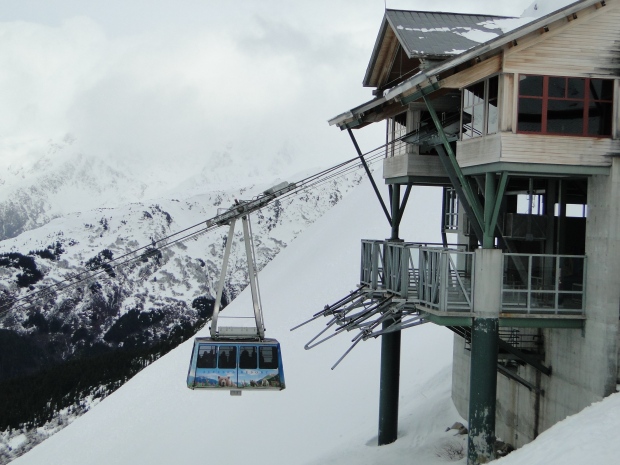 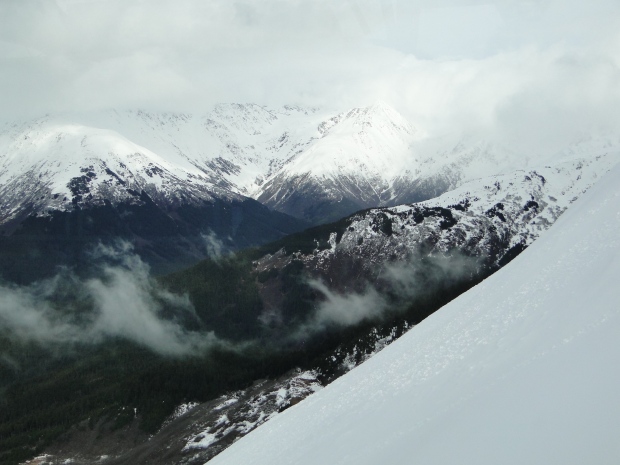 Our first stop was the Alyeska Ski Resort which wasn’t immune to the lack of snowfall with the bottom of the mountain snow-less leaving the half-pipe an empty dirt-filled hole. We took the tram to the top of the mountain and it was a stark contrast with a snow-covered peak. The winter landscape I had come here to see. This mountain visit almost didn’t happen as I thought it wasn’t worth my time. 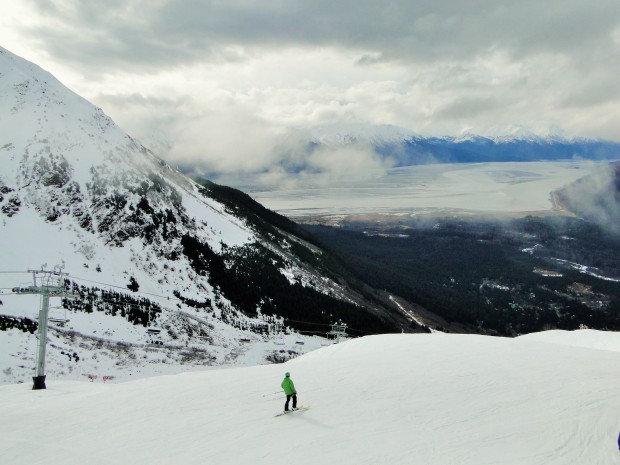 To my surprise, the views from a top the mountain was spectacular. The snow-covered hillside with the inlet in the background was remarkable. 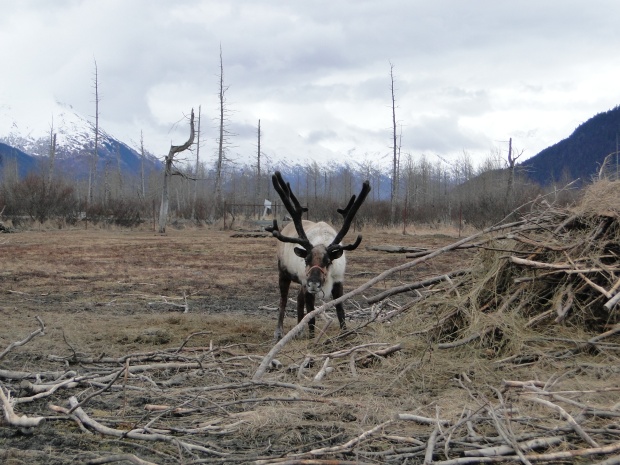 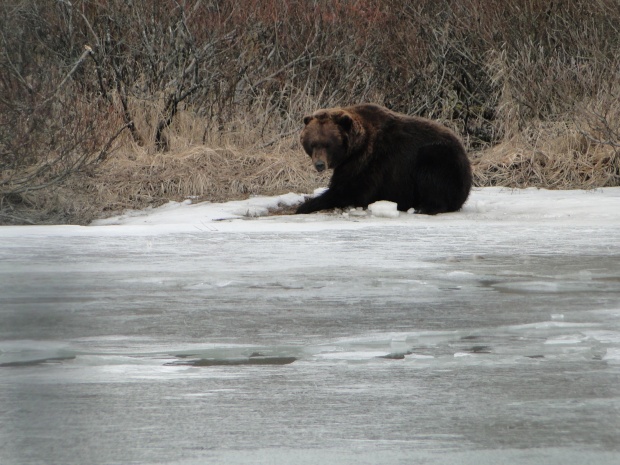 We then arrived at The Alaska Wildlife Conservation Center and to my surprise majority of the animals were out and visible. The enclosures were much larger than I imagined with the animal able to roam and easier to photograph. 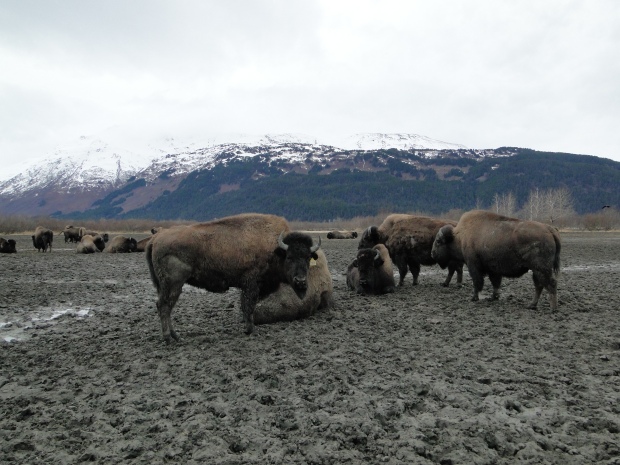 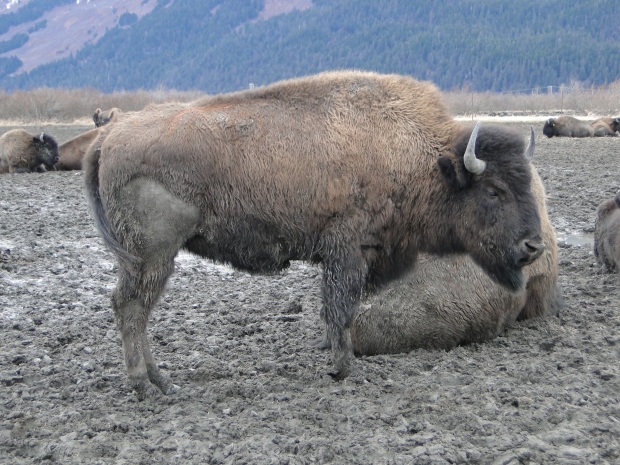 A high light of the visit was the wood bison, 300 pounds larger than the plains bison of Yellow Stone National Park, and the largest land animal on the continent. This subspecies is endangered but with the success here they are now in the process of introducing half the herd back to the wild in western Alaska. 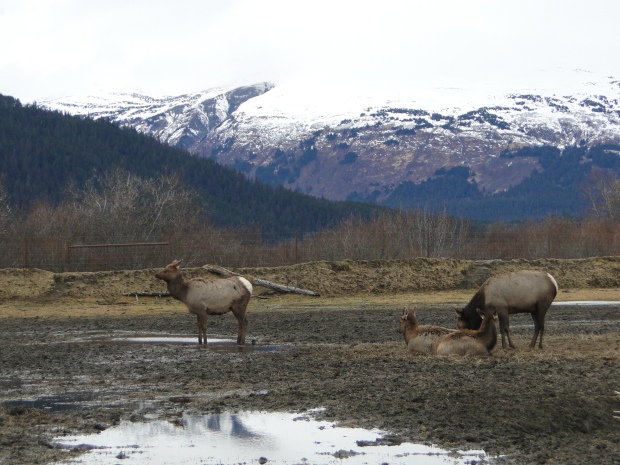 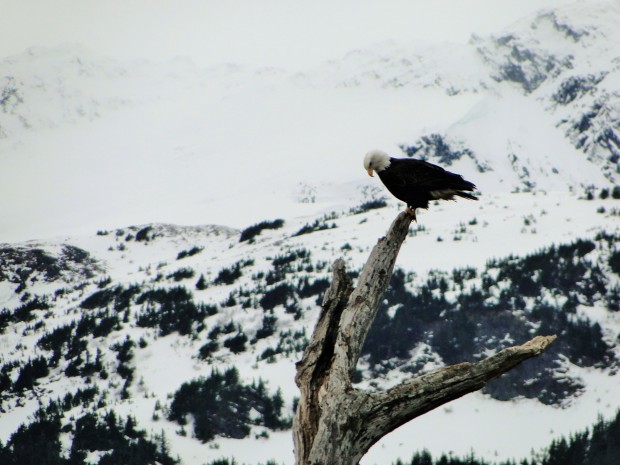 We were also blessed with a bald eagle flying in to view the new arrival of visitors, our tour group, and perched itself for easy viewing. 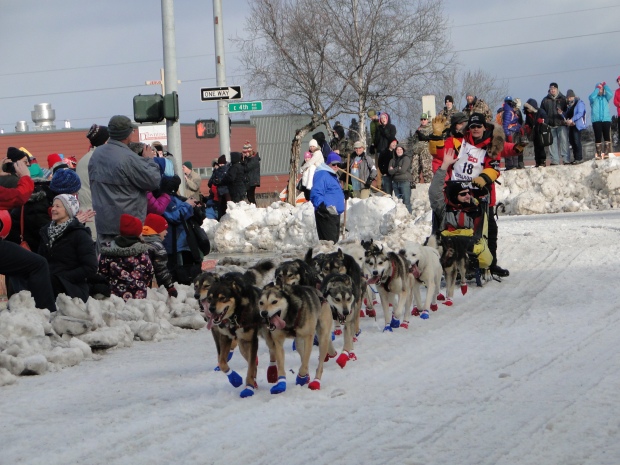 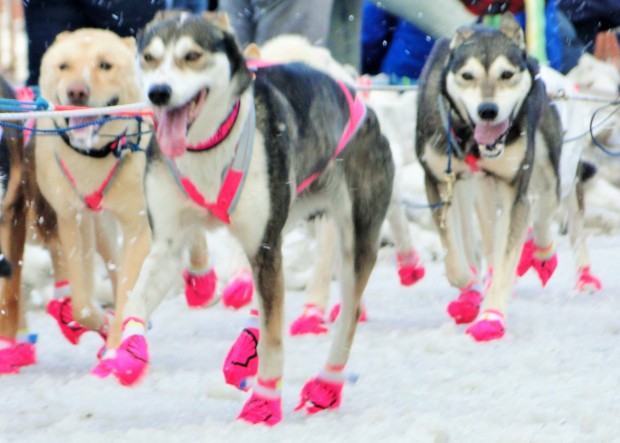 My last full day in Anchorage consisted of watching the ceremonial start of the Iditarod. Snow is laid out on the road for the sleds to travel on as the sleds are pulled through the city for the fans to see. The course officially starts in Willow but this year, with the low snowfall, the start was moved to Fairbanks. 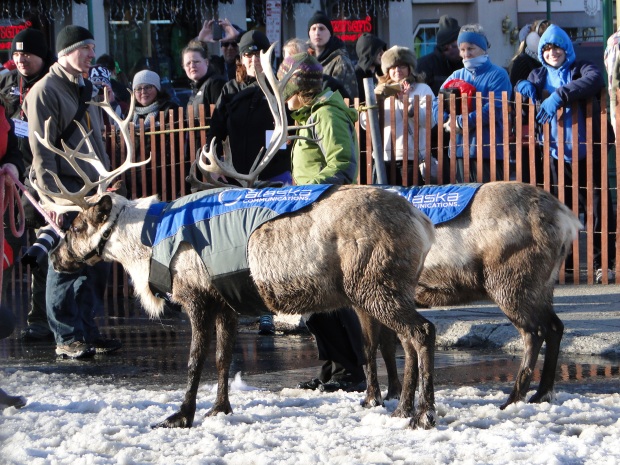 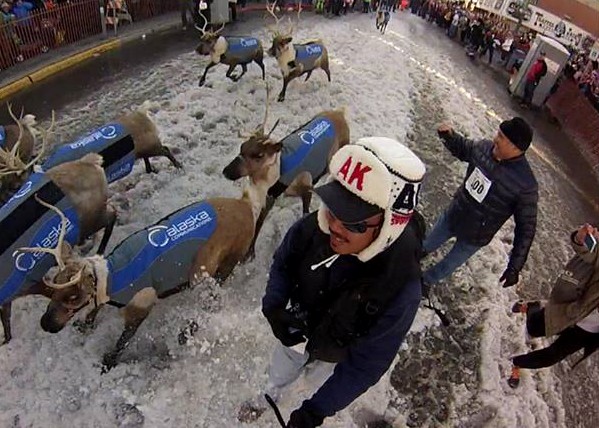 In the afternoon, the city switched its focus to The Running of The Reindeer to raise funds for charity and a part of the Fur Rondy events. The event is a great format for the locals to show its sense of humor and light-hearted attitude. 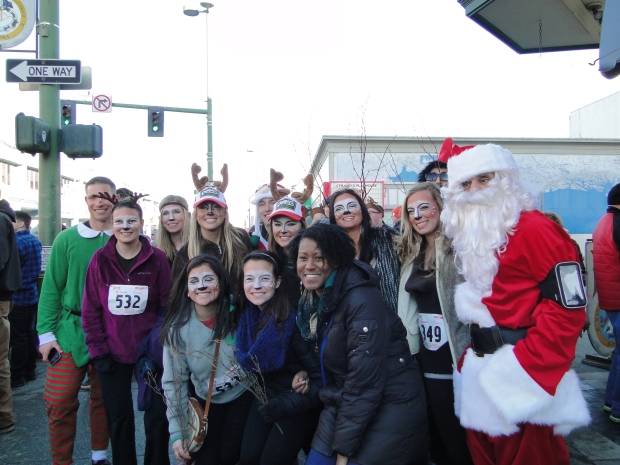 After eight years, It’s also attracted more and more foreigners with the notoriety steadily increasing among adventure seeking travelers. (For more on this event please see my article, which includes a video, at:  The Running of the Reindeer)

Alaska, and Anchorage in general, is a special place for me and would definitely be a location I would return to. I did miss out on the Northern Lights so I would also have to consider a more northern location to view this phenomenon for my next expedition to Alaska.

For additional articles and photos please see below,

A Ride on Misty Mountain

My Portal Through Time and The Alaska Experience

← The Running of the Reindeer
I and The Iditarod →

14 thoughts on “Rugged and Enchanting, Alaska”