My Portal Through Time and the Alaska Experience

1,000 years ago the Roman Empire split into the Eastern and Western empires and China was on its way to becoming a nation. The Tasmanian wolf terrorized the island. The dodo bird ruled the earth… sorry, roamed the earth. Wouldn’t it be great to be a Roman in Constantinople. Unfortunately, I don’t have a time machine. But, imagine touching a glacier that is a 1,000 years old.

July 2013, this is what I did along with my brother, Val. Spencer Glacier is in a remote valley that can only be reached by train. The only roads here are un-kept, dirt, park ranger access roads. Yes, it’s just my assumption that Spencer Glacier is that old but some glaciers in Alaska are known to be 1,000 years old.

The Alaska Railroad dome car can be taken from Anchorage to Spencer glacier where you’ll pass through a mile long tunnel and see the wonderful landscape that is Alaska. At the end of the rail, we were picked up by an old school bus from the 70’s that the hippies must have left here. At the final destination, you can’t help but be in awe of what’s in front of you. a beautiful blue lake with a glacier field on the opposite side of the lake. We carefully step into a raft, cautious not to get a drop of the 45 degree water on us. We get closer to the glaciers floating in the middle of the lake and the excitement just builds even greater. These rafts aren’t allowed to paddle to the actual glacier as they are known to fracture and fall into the lake. These floating glaciers are thousands of pounds and could do some damage if it falls on our raft. These miniature icebergs are what we are after. 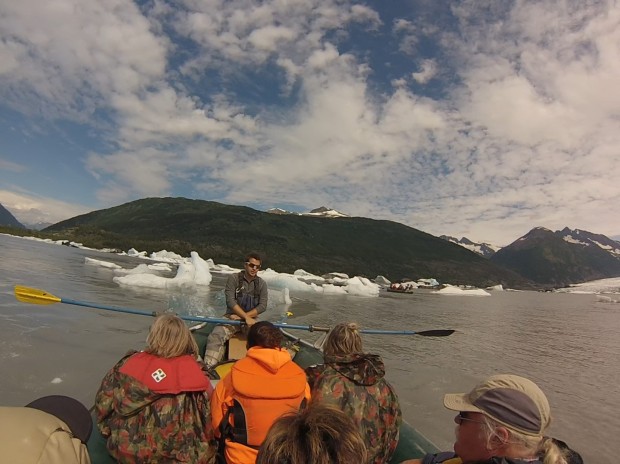 The guide rowed right up to the glacier and we are all able to touch it, like putting your hand through a portal and touching something back in time. The guide is able to find a small piece and we’re able to hold it. Breath taking experience is my best description I can come up with.

The day is not over as we paddle down the river to our pickup point to rendezvous with the train.  Along the way we scoured the hillsides for bears and sheep and for beaver dams along the banks. We also disembarked from the raft on a spot on the river known to have deer and bears. No bears, thank god, just bear droppings. In fact there were no wild life at all at this spot.

Another early morning and we are on the way to Resurrection Bay for a whale watching cruise through the beautiful Seward Highway/Highway 1. 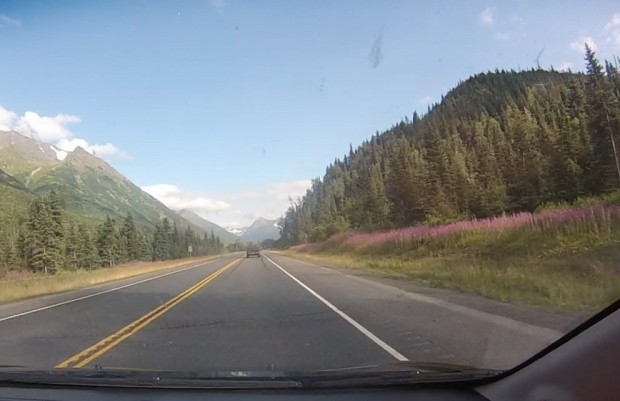 The road is a scenic highway along the Turnagain Arm Inlet and over beautiful mountains along side placid lakes to the town of Seward. I guess we were enjoying the drive too much as we arrived at the dock a little late. With the all the passengers already on board, we were told the captain was ready to depart and the tour company employee had to valet the car as we rushed to the boat. 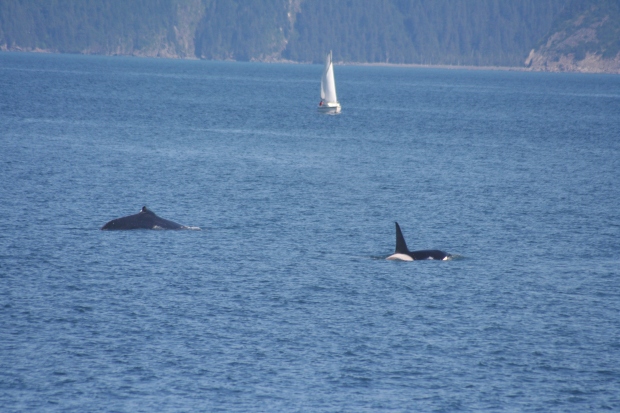 An amazing thing happened on this day, we witnessed a pair of humpback whales and a pair of killer whales, along with their infant, were swimming and feeding together. What’s so remarkably about that? Orcas are one of the few predators of humpback whales, along with Japanese whalers. We watched them swim together for about an hour before we had to return to town. They swam together as if they knew each other by name with the infant orca playing alongside constantly flapping its tail as if he was performing for us.

My first experience in white water rafting was a class II – III river in Costa Rica and it felt a little like the log ride at Disneyland so I wanted to do a class V run. Six Mile Creek, less than an hour drive from Anchorage, was that river run. Most of us have seen videos of white water rafting, people being jostled by the current of the river and the danger of rocks and boulders along the way.

The speed of the river, the pounding and the danger is the source of the adrenaline rush you receive. On the way down the river I wonder why any person would do this. But the sense of accomplishment at the end is incredible. As if the normal dangers of running the river isn’t enough, the guide decides to go ‘raft surfing’. This is when you find an eddy in the river and ride the current at the edge of that eddy. This was the only time on the river I thought we would end up in the water as the current almost flipped the raft and that water is no joke.

Before you could even enter the raft, we were submitted to a swim test. Easy right? It would have been if the water wasn’t 45 degrees. Even with a dry suit that reminded me of a NASA one piece, full body, space suit, it was still freezing. It took all our strength to swim to the bank of the river. Oh, and the guide said the water is warmer today because it rained the night before so the river isn’t 100% ice-cold glacier water. 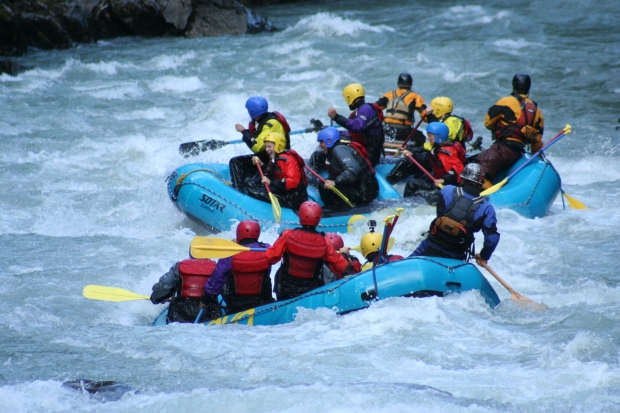 28 thoughts on “My Portal Through Time and the Alaska Experience”