A Ride on Misty Mountain

The night before,  it rained and made the Chugach Mountains misty and damp this morning. The clouds clung to the hillsides  the morning we scheduled our Mustang ride. After a short drive from downtown, my brother, Val, and I arrive at a park at the edge of the city limits. Not all the horses are Mustangs but my ride is and it’s huge. So big, the guide recommended I get on top of a picnic table in order to mount the horse.  Being short doesn’t help my cause either. Turned out we all had too.

We set off and it’s so misty and foggy, we can barely see fifty feet in front of us.  As I ride point, the guide is tending to someone behind me in the group, I notice a silhouette figure of a man on a horse. As the guide trots back to the front,  she tells me to stop. “There’s a bull moose on the trail” she tells the group. We’re now close enough that I can make out the giant antlers, which I first thought was the man on a horse through the cloudy mist. Riding side by side we slowly approach the moose hoping the bull would be scared of by the number of horses headed its way. It didn’t work. The moose turned in our direction. Appearing to charge us,  we did what the guide directed us to do. One by one we turned the other way and galloped in the opposite direction. I kept my head on a swivel,  constantly looking back, but the moose didn’t follow. Needless to say, we took another trail and the visibility got a little better towards the lower elevation. I was disappointed we didn’t see more wildlife because of the weather but it was still a great experience and only 30 minutes from downtown Anchorage, Alaska. 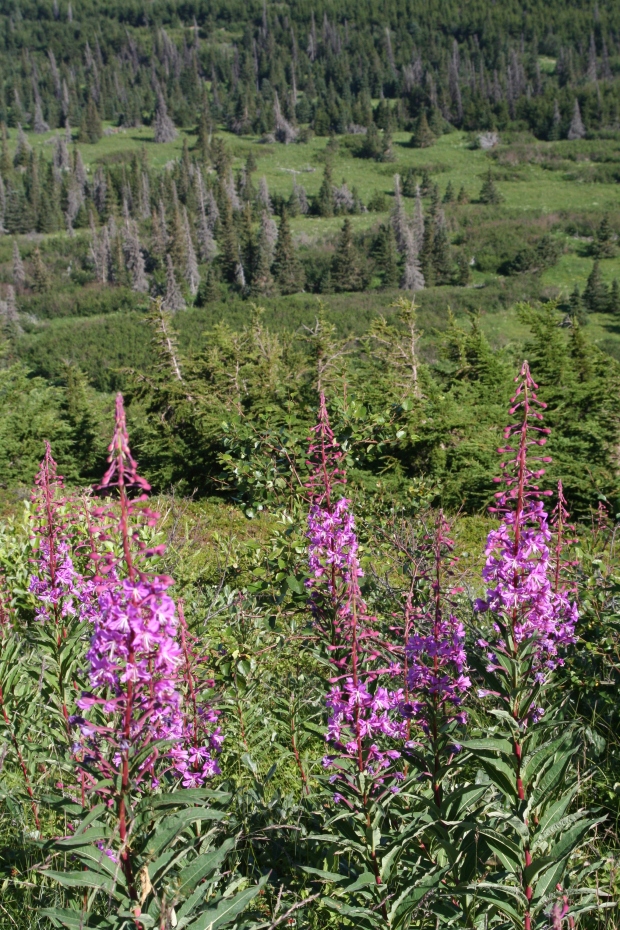 The most common way to see Alaska is by a cruise ship but for some one to see the interior you have to do a land based tour, in my opinion.  Anchorage is a perfect location to base an ‘expedition’ from. It’s also a great little city in its own right. The downtown area is a great area for bars and restaurants with rows of souvenir shops also. And,  filled with native history and more modern history like The Great Earthquake of 1964 that measured a magnitude of 9.2 lasting 5 minutes and rearranged the city. July 2013, my brother and I stayed in downtown where everything was in walking distance. The city trolley, Ship Creek, and the train station within 5 minutes.

Taking the train is a great way to see Alaska specially in the Alaska Railroad dome cars where you can take in the greenery of the forest and the snow-capped mountains with the occasional bald eagles overhead. 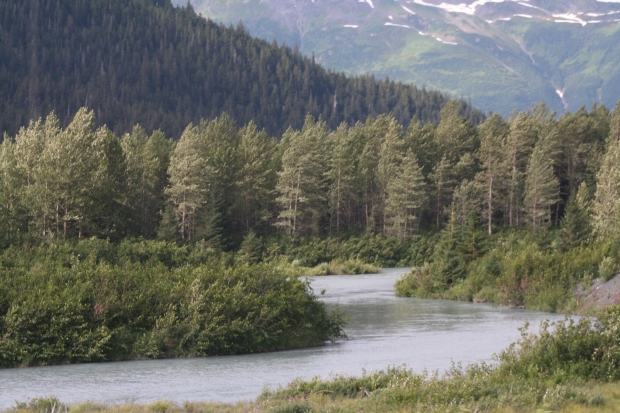 I was pleasantly surprised with all the activities you can do in and around the city. One afternoon we rented bicycles and peddled 20 miles round trip on the Tony Knowles Coastal Trail which follows the coast of Anchorage through boreal forest, inlets filled with ducks and geese, with views of Cooks Inlet and 6 different mountain ranges.

We also came across a family of moose which weren’t camera-shy and less aggressive in comparison to the one in the Chugach Mountains.

During our bike ride,  it was low tide revealing the fact that Anchorage has one of the most extreme tidal shifts, 40 to 50 feet. Which isn’t the ideal conditions for cruise ships so if you’re on a cruise, you would have to find a transfer from Seward or Whittier where the ship’s port.
A big draw to Alaska is its fishing and realistically you could stay within Anchorage if you where an angler that needed a fix. The city has multiple lakes and minutes from our hotel is Ship Creek  where 50 pound king salmon have been caught. Fishing in these near by creeks and rivers is referred to as “elbow fishing” by the locals. After work hours,  the locals will head for the creeks and rivers where the anglers are just a few feet from each other,  elbow to elbow. We watched the fishermen so close to each other they often got their lines tangled.   With sun setting at midnight,  you can still get a good session in before night fall.

Flattop mountain is not the highest peak or the toughest hike I’ve done.  It does have some spectacular vistas from the trail head and at the top of the mountain. It does get a little difficult near the top as the trail becomes steep and there is no way around the shale rocks making your footing very tricky. 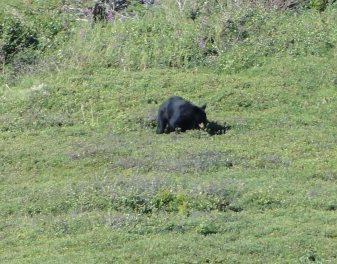 On the way down the mountain we were honored by a black bear eating berries. Luckily,  it was feeding in a meadow On the opposite hillside. Just to be safe, in case the bear headed in our direction, we quickened our pace and warned others on the way.

On one side, you have a beautiful panoramic view of Anchorage and the coast and on the other side is the boreal rainforest (snow forest mostly of pines, spruces and larches) of the Chugach Mountains. And, only a 30 minute ride from Anchorage.

Anchorage is also home to the largest seaplane airport in the world. Majority of the back country has no road access and can only be reached by plane. This is also a popular way to get to remote streams for fly fishermen.

Anchorage is a great location to start your expedition of Alaska and was my chosen jump off point.

14 thoughts on “A Ride on Misty Mountain”